The latest from our blog

Teaching puppies to cope with separation 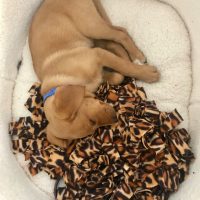 It’s important that we gradually build up periods of separation in young puppies rather than just leave them and hope they cope (or actively ignore them if they are not coping).
During the first day after bringing our puppy home, she was not left unsupervised at all.
At night for the first week our puppy slept with us, gradually moving her bed away from our bed until it was on the landing. She then stayed sleeping on the landing for another week until I was sure that she was able to last all night without needing the toilet, at which point I moved her bed downstairs but so I could still hear if she were to vocalise.

On the second day, she slept inside the house whilst we spent time in the garden so that we could hear if she vocalised. She was provided with toys, novel items to explore, or activity feeders when she was left alone in her safe space whilst we were in other areas of the house.
I taught her to go to her bed and settle down so that her beds became a great place to be, and she would actively choose to sleep in them. Everywhere was puppy-proofed so that she was free to explore and gain independence in certain areas of the house and garden, without requiring someone to be with her all the time.
Once it was clear that she could settle when we were upstairs or in another room of the house, we set up a video camera and left her at home alone for a short period once she was already settled.
Gradually we have built up the time she is left alone at home whilst using a camera to ensure she is actually settled (many people perceive their dogs to be relaxed when left alone but after videoing discover that they are actually distressed).
If your pup cries or scrabbles at doors when left alone and then you return home, your puppy will learn that vocalising/scratching at doors brings you home – that behaviour then becomes reinforced. Telling your puppy off for these behaviours on your return home simply increases anxiety next time they are left alone, exacerbating the problem. Best to set your puppy up for success from the start instead of throwing them in at the deep-end – whilst also ensuring that you do teach them independence.

Posted in Dogs. by Rosie Bescoby