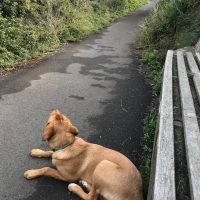 5 minutes of exercise per month of age: that’s the routine advice for growing puppies to prevent physical problems during development. So for an 8 week old puppy, that means 10 minutes of exercise per day. However, like most generic advice, I always think this is a bit prescriptive. Whilst it gives us a rough idea to keep in mind not to overdo it with our pups, there is a HUGE difference between relentless ball throwing for 10 minutes with an 8 week old puppy versus a 10 minute mooch most of which is stationary to watch the world go by.

Our pup is now 5 months old, so if sticking rigidly to the rule this means she should be getting 25 minutes of exercise per day.
Here’s what our ‘exercise’ schedule actually looks like (varies hugely day-to-day):
– Walk(s) which usually consists of a mixture of on- and off-lead, varies in length between 15-50 minutes…
– Periods of rest within our walk, sitting & watching the world go by and learning to settle whilst out-and-about.
– Training constantly incorporated into walks – rewarding voluntary check-ins, practicing heelwork and stationary exercises such as sit-stay.
– Lots of sniffing, including scatter feeding as a reward.
– Play with other dogs in the house (this is generally low-key and well self-regulated).
– Set-up retrieves (this means the toy has come to a stop before the dog is released, so no leaping or twisting in motion which has risk of injury).
– Toy games at home including tug and search games.
– Trips out where we might just sniff around a carpark or settle in a cafe.
In other words, there is very little running around, no charging around with unfamiliar dogs, and her environment is generally set-up with her physical development in mind – this should not just be about restricting exercise.

The other side of that coin is to bear in mind that first experiences of the world for small puppies will be hugely mentally tiring. So expecting them to be able to do 10 minutes of traditional exercise (‘going for a walk’) when everything is so novel can result in both a physically and mentally tired puppy – resulting in lead grabbing and jumping up at the owner (effectively asking for help! Pick them up, they are probably tired or overwhelmed!).

So my advice – get rid of the notion of a traditional dog walk, not only during puppyhood but also as your pup grows into adulthood. Lots of sniffing, taking to different places, making being with you far more valuable than being with other dogs, slowing down the pace of your walks, stopping and take 5 minutes (after all most of us want this ability to settle outside of the house in our dogs), and getting rid of the ball thrower!