The link between pain and behaviour 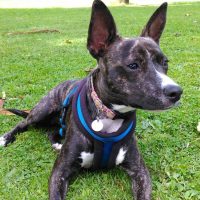 Recently I was referred a case of a fearful dog. The referring vet was suspicious that the dog had something medically abnormal and had run some bloods but wanted the client to receive some behavioural advice whilst waiting for the results. Laika the young rescue dog was a little joy when I met her. A tiny little Staffie-cross who quickly requested some cuddles. She was adorable.

Laika was tiny because she was underweight. The owners struggled to get weight on her and this was the vet’s main concern and reason for investigation. Although Laika was initiating cuddles during my visit, there were many occasions when the owner reported she noticeably retracted away from contact and became a loner. She was frightened of kitchen noises and would promptly leave the kitchen as soon as any crockery or cutlery were moved around. She was frightened of traffic, and would freeze on walks and cower in response to vehicles moving past her. For a while she was reluctant to walk up steps, appearing frightened of them. She was more withdrawn and more fearful of unfamiliar dogs on her walks than when she was first obtained.

Through further questioning, it transpired that Laika would be noticeably stiff after being cold, and although only an adolescent she would sometimes move around “like an old lady”. She would hesitate as though psyching herself up to jump up into the car/onto sofas. Certainly it was apparent to me when observing Laika that she was extremely stiff in her gait. I recommended we liaised back with the referring vet and a course of pain relief was trialled with significant improvements in Laika’s behaviour and some weight gain. Subsequent X-rays showed spondylosis of the spine with fusion in her rear end and bone spurs at the top of her spine which would be causing the most pain. An unfortunate diagnosis in a dog so young.

It was now obvious why Laika would often avoid physical contact and why she was reluctant to go up steps (I suspect that the motivation to get up the steps of her ground floor flat to go for her walks eventually outweighed the pain, and/or that she worked out a specific way of going up steps that minimised any pain). Running around with other dogs was also likely to be associated with pain – anticipation of pain is frightening. Pain, fear of pain, and memory of pain (and the associations formed) cause psychological and physiological stress. Chronic (long-term) pain will cause the stress hormone cortisol to be produced. Laika’s sensitivity to kitchen noises and traffic was enhanced by feeling so rubbish most of the time – we are all less tolerant of things we dislike when we suffer from chronic pain. Ongoing production of cortisol leads to further issues such as a compromised immune system.

Let’s consider the results if advice had been sought from a different canine professional. Perhaps someone who believes that dogs should always do as we say no matter what. If the dog doesn’t want to walk into the kitchen, they will be forced to because they’re just “attention seeking”. If a dog tries to shy away from traffic, they’ll be forced to face their fears. If they don’t want to be handled, they’ll be restrained until they stop trying to get away because we humans should be in charge. The welfare of the dog would be severely compromised if we continued to force her into situations that she didn’t want to be in (whether motivated by physical or emotional disorders).

As behaviourists, the ability to observe the animals that we work with is so important. We spend longer with them (and have the time to take a more detailed history) than the referring vet, as well as observing the dog in its own environment (animals at the vets often experience an adrenaline-rush which means they can disguise symptoms of pain temporarily) so feeding back our observations and information to the vet and working together as a team is vital. It can be common for vets and behaviourists to find that owners deny there may be a medical issue causing, or contributing towards, their animal’s behaviour – animals can be good at masking pain and owners are often confused that their dog will still want to go for walks, chase a ball etc. The motivation to want to participate in certain activities will often outweigh the motivation to avoid pain – in addition, the adrenaline associated with some activities will mask feelings of pain. Behaviour that an animal shows us is INFORMATION and the first indication of pain is usually a change in normal behaviour. Luckily for Laika, her owner was aware that her dog was providing her with information and she is now living a much happier and fulfilled life.